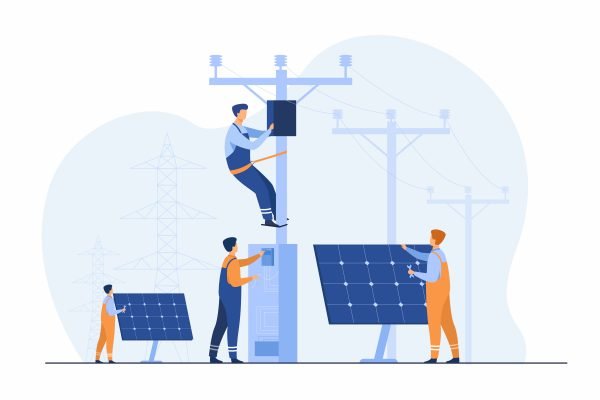 However, from an economic perspective, power plants are required to be built near load centers. Load centers are the place where the number of electricity consumers or connected loads is relatively higher than the other parts with a deficient number of consumers. However, Due to various economical factors and other natural factors, establishing power plants near the load centers is often not possible. These factors impact heavily on the establishment of power plants which are more likely to be built near the natural source of electricity, such as coal, gases, water, etc.

The network through which the consumers get access to their electricity is most commonly known as the electrical supply system. It consists of three different parts they are the generating stations, the transmission lines, and the distribution system.

The power generating station generates electricity at a relatively low voltage, due to its economical advantages. Afterward, the set-up transformers installed at the start of the transmission line increase the voltage level of the supplied electricity and then transmit this higher voltage electricity to the nearest zone of load centers. High voltage transmission lines are either constructed underground or overhead in order to ensure the safety of the consumers as well as the surroundings. At the end of the high voltage transmission line, there is another transformer installed on it, which reduces the voltage of the transmitted electricity to a more desirable one. So, the distribution of electricity is done in an appropriate and convenient manner.

Once the voltage of the transmitted electricity is lowered by the step-down transformer, the distribution boards come into action and distribute the electricity to consumers according to their requirements.

The Requirements of electrical supply are not only bound by the process of transferring produced electricity from the power plants to the load centers, but it also is required to facilitate the electricity properly throughout an infrastructure or the locality. So, it is essential for the electrical supplies provided by electrical switchgear suppliers to follow the standards that have been set by the industry.

The first and foremost role played by the electrical supply is in the power distribution process. As mentioned earlier, from the production plants to the consumer's end, the transmission line through which the electricity is transmitted consists of wires and cables. Wires and cables are further required to facilitate electricity throughout an establishment or infrastructure. These electrical supplies are made from materials that let the electricity pass through them perfectly. Furthermore, these are insulated, so it doesn't get affected by moisture or any other factors.

Another most essential wholesale electrical supply component is the storage Components known as batteries. Where you can store electricity for future disposal. Batteries are often used with inverters and places where the electricity supply is inconsistent.

For lighting in a house or establishment, there is a wide assortment of components required. These components are mainly switches, wires, sockets, etc. However, the essential components are the bulbs or lights. Nowadays, environmentally friendly components are available for your disposal. These are called environment friendly because of their efficiency in lower electricity consumption as well as causing less pollution.